Style of Writing (Arts vs Techs):
- Too technical
- Lose the list – can put them into glossary or appendix
- Technical vs Art style of writing – artists like to elaborate, tecchies like to keep it short,
- Citing format e.g. [6] states that... (where 6 is referring to Kishore's paper ---> engineering papers allow that, but in Arts, you write it like this ---> Kishore states that …. [6].
- Style of writing → use numeric year when possible, e.g. replace 'in the last decade' into 'in the 1990s'
- whenever a piece of performance is mentioned, italicized and give date Plunderphonics (1985)
- Consistency – if giving both 1st and Last name, keep it the same for all authors, e.g. In 1963, Hiller (last name only).... then Leonard Isaacson (both 1st and last name) – > inconsistent!

Content
- explain more
- write it as if it's a review
- give in more analysis
- have mentioned the important things, but have not tied it down together, e.g. not putting an intro of why I am about to describe these things, and not giving a conclusion of what is the output of the all reviews?
- Explain the charts, graphs and tables
- Don't be afraid to write more than less – e.g. on data-driven vs rule based, syntax vs semantics, linguistics review, Dawkin's theory of memes
- Add more references, especially when the words like 'believed' , 'found' have been used
- A lot of the information is implied, BUT need to be directly stated, e.g. Why is Markov chains important to the study? ---> I've put it there, but no supporting arguments to link Markov and concatenative sound synthesis
- Cancel out the word 'assumptions', replace with 'hypotheses' <--- sounds more academic :P
- How have the objectives been met?
- Include URL of certain tools, put as footnotes
- Conclusion comes before the Future Directions
- It's okay to be blurry at this stage, but tie up how the findings right now will lead to the next step

English
- missing a few articles here and there
- too strong adjectives have been used, e.g. better, improved, more flexible ---> try to use more tentative words
- etc → replace with 'and so on'


I honestly think that the criticism wasn't too bad. I had all materials with me, I just didn't tie them up together strong enough. Plus this is just a first draft, I suppose it could have been worst. It's a good thing that both SVs agreed on the same points, so tiada kebercanggahan di situ. Phew! And my co-SV is a real help, bcoz he knew nothing of my work before this afternoon, so he could spot things that were missing (things that my SV and I had known, hence I took it for granted and left the info out). He's also from the Arts background, so he pointed out that my writing style is leaning towards engineering (short and full of sections and subsections), whereas he would have liked it if it were written in paragraphs, as if reading a book.

This has also made me realized the need to follow Al's advice to start writing everything I read as if I'm writing a review paper now. Only when you have written down everything will you have seen if the story flows or whether you are making any sense at all!

On the positive note, both SVs had thought that I had done a really excellent job on Chapter 4: Preliminary Investigation. Almost the entire chapter tiada pembetulan. Woo hoo! And they said that it totally showed them that I knew what I was developing, and without a doubt they could tell that I was the programmer. Yo lah, poning2 kepalo buek coding siang malam tu jgn x tahu, mmg luluh la hati kalo diorg label upah org pulok kan hehe...

Tang future directions ingatkan I nak kena hentam dgn dahsyatnya, sbb very loosely written, tp diorg kata it's ok. At this stage, mmg kena tunjuk WHAT you have done, and WHERE are you going from here, it doesn't matter yet HOW you are going to get there, bcoz plans will always change. 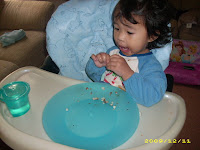