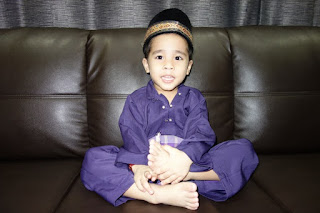 I've written an update on Aisyah last night, so it's only fair to let Zayd has his turn tonight :D

Zayd is a playful 3 years old. He brings a lot of laughter and love in the family. He has a very strong determination - when he sets to do something, he will get it one way or another. For example, a cookie. Before bed. Adeh... but that doesn't mean that he's 'degil'. No, he's past the tantrum throwing stage. He uses psychology. And lots and lots of acting skills. For instance, if he wants the said cookie, he doesn't roll on the floor and cry, but instead, he will ask if anyone is hungry (because he is). Then if nobody falls for his bait, he will start rubbing his tummy and start saying that he has a stomachache. And he's a pretty convincing actor as well, bless him. so it's hard to say no.

Pretty and convincing. A lethal combination. I always lose. Haha 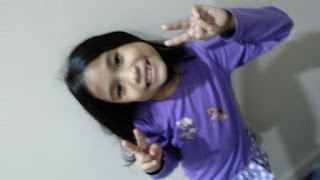 Since dah lama sgt x update, I'd thought I'd write an entry pasal my first born, Aisyah. Blog ni pun after all, was started from the moment we found out we were expecting her. So here goes.

Aisyah is now 8 years old. Lost a lot of baby teeth already, and growing taller by the day. All throughout childhood and then the teenage years, I have always been on the chubby side, but Aisyah so far looks like she is taking up from her Dad's genes. She is slim but not too lanky. Playful, yet has a very sensitive soul. She can't watch Inside Out or Doraemon the Movie without shedding some tears. Heck, she cries even when we part to say Goodbye to her Tok Ma, who lives 30 mins drive a way. Every. Single. Time. Haish...

She's currently enrolled in a school which incorporates both secular and Islamic curriculum, and she's thriving in her school. Alhamdulillah, she is doing well so far to balance between work and play, especially since her Islamic curriculum means that she needs to have recite and memorize a few verses of Quran each day (a challenge on me more than it is on her, sbb hari2 kena Tasmi' (listen and correct her hafazan) dgn dia hehe).

She dominantly speaks in Malay now, although if needed, she could still whip out the good ol' English language, minus the accent it seems. YouTube has actually muddled up whatever's left of her cute British accent, as she watches a lot of the American kids channels on YT (she used to love EvanTube but has sort of moved to some other more tweens-like channel. Blink and you'll miss has never seem truer.

Although there's a 5 years difference between Zayd and her, she still frequently fights over the same toy and is almost bugged by the lil bro once a day at least. But deep down, we know she loves her lil bro, it's prolly just her way of showing it.

8 years old. That's how old this blog seems. Wow.. can't quite believe it. All the more reasons to keep the writing going, I suppose ;) 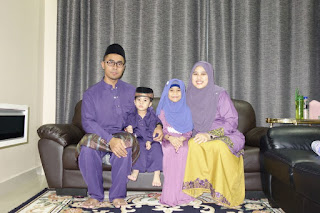